ZBGIS® Feature Catalogue (KTO ZBGIS®) a collection of information that describes groups of features managed in ZBGIS® geodatabase. It also defines methods of their collection, geometry type and their properties (attributes). The current 2019 version of the Feature Catalogue was created by revising the 2018 version, which reflected all the conceptual assumptions and possibilities of our Authority when updating the ZBGIS®. A revision of feature classes and attributes, which collection and updating is not relevant from the point of view of the contribution of the information value in relation to the cost of collecting such data, has been performed.

The starting point has been the gained practical experience in the implementation of ZBGIS® data collection and the resulting reduction consisted of cancelling feature classes that were not collected (whose specifications were above standard for the Authority), their occurrence frequency was low or they werein responsibility of other organizations (administrators). Another type of reduction was the cancellation of multiple geometric interpretation of selected feature classes and the elimination of attribute values defining the functional properties of feature classes, which usually has the administrator (e.g. bridge load capacity, travel speed, etc.). The document is available here.

The scope of individual feature classes is declared by the content defined by valid KTO ZBGIS®, which has been standardized on the basis of the international DIGEST standard using FACC coding of individual features. Each feature class has its own FACC code, based on which the feature belongs to the appropriate category. DIGEST specifies a clear database structure and coding at the following levels:
1) Category (one letter A to Z),
2) Subcategory (one letter A to Z),
3) Feature (one letter of the category and subcategory + triple numbers from 000 to 999),
4) Attribute (code consisting of three letters A to Z),
5) Attribute value (number, range of numbers, text).

Category – determines the characteristics of features belonging to it. ZBGIS® as a whole is composed of 10 selected categories (Table 1), where the content (classification) identifies individual topographic features according to the theme. Category code used in ZBGIS® is determined by the first letter of FACC feature class code. 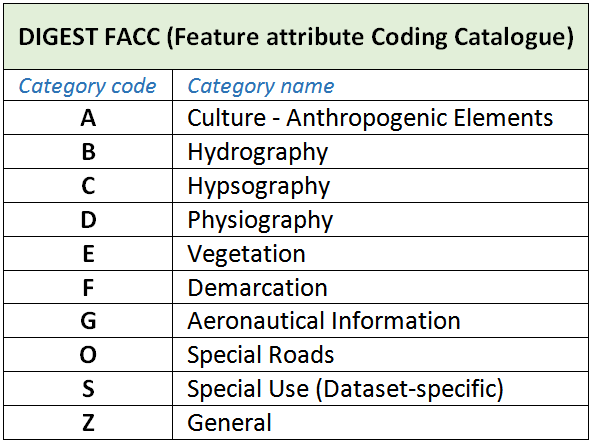