ZBGIS® is a real-world model with precisely defined level of detail and abstraction by KTO ZBGIS®. It describes aspects of quality of features and phenomena over time and allows them to be analysed and graphically presented. ZBGIS®  is the geometric basis of the National Spatial Data Infrastructure (§2 section 13 of Act No. 215/1995 Coll.).

ZBGIS® Feature Catalogu e (KTO ZBGIS®) is a collection of information that describes groups of features managed in geodatabases of the Information System of Geodesy, Cartography and Cadastre. It also defines methods of their collection, geometry type and their properties (attributes).
ZBGIS® reference data consists of:

ZBGIS® is a seamless geodatabase that covers the entire territory of the Slovak Republic. Data collection took place in designated areas between 2001 and 2010 according to the rules of KTO ZBGIS® valid in the year of data collection.The picture below shows an overview of the years of data collection - the year of collection is the year when the local investigation was carried out in the given area. 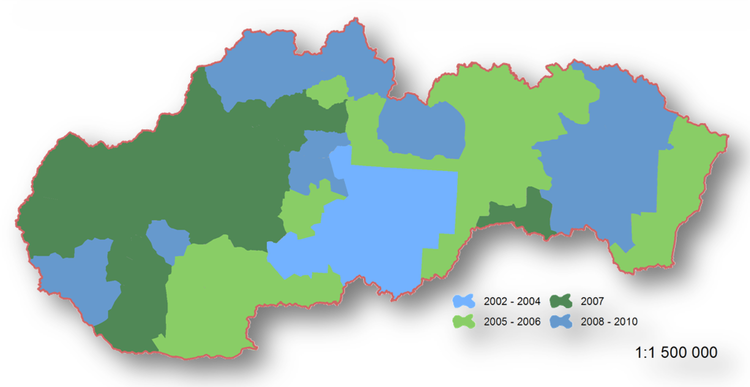 The scope of individual feature classes is declared by the content defined and valid by KTO ZBGIS®. The viewing detail and suitability of reference data is in the range of scales from 1: 7 000 to 1: 20 000.For more details, see KTO ZBGIS®.
ZBGIS® is a spatial geodatabase maintained in the S-JTSK coordinate system (JTSK03 implementation) and in the Baltic Vertical Datum after adjustment - Bpv (H).
The logical arrangement of ZBGIS®  reference data in the geodatabase consists of: